Posted: December 6, 2011 | Author: classiccitroen | Filed under: Classic Citroen For Sale | 2 Comments
I have just put the following ad up in the showroom on our website. To contact the vendor, please visit the ad on our website for his contact details.
1973 Citroen DS20 Safari in exceptional condition. (We have inspected this car ourselves and can vouch for this. It is in truly exceptional condition. – Citroen Classics)  It has covered 74k miles and has a 4 speed manual gearbox. One
previous owner before me Atol Machan (an aerospace engineer) who was well
known to the Citroen Car Club and the car was a `concours d`elegance` winner a number of
times. It was kept in dry storage for a number of years and is still completely
original and unrestored. 5 new Vrederstein tyres, a starter motor and fuel pump saw it come back to life and pass its mot. It has driven
fabulously throughout the summer and the only know faults are that the fuel
gauge doesn’t work and the fuel filter can block up after some use. The
seats are separating in places on the rear squabs but completely intact. The
only non-original item is a Paddy Hopkirk soundproofing kit.
I have removed the tow bar for aesthetic reasons and put the folding seats
back in the boot. There is a small panel missing in the boot and the
replacement I have is a bit rusty unlike the rest of the car! The photos are
pre-tow bar removal and with the original holiday stickers on the boot which
after a lot of thought I removed (I still have some that were not put on and
could be!), plus the number plates are now black and silver. See photo with
the Corvette (also for sale!) More photos available on request.
I really think this car is a `keeper` but I feel more like a custodian of a museum piece than a relaxed driver but that’s just me!  Loads of spares, original purchase reciept, log book, brochures, and masses of history as well as original and comprehensive (beautiful) Citroen workshop manuals.

I received the following from David Mitchell today, which may be of interest.

I have a 1965 Citroen H van that was acquired in 2004 after 13 years of patiently waiting for our neighbour in France to sell it to us. A painter and decorator’s van throughout its life, the retirement of M. Legros led to our completing a deal struck in 1991. Driven over the Channel to the UK, reregistered and sent more or less to a health spa the H (called Lulu, by my wife and kids) was stripped down to bare metal and rebuilt (with new panels where necessary), given a professional external paint job by David Royle & Co of Staindrop, County Durham and has been used as a dry-weather toy and mountain bike transporter for family outings.

Externally in great shape after its rebuilding, the inside remains with its original silver finish, albeit complemented by new seats in the front and a rear-facing bench seat for three behind in the rear storage area. The vehicle has a new exhaust system, starts first time, every time and is garaged when not out getting a tan!

As our family is growing up and out of the home (and garage) and we have a Traction promised to us the H is sadly up for sale.

There is a full file of documents relating to its rebuild and even its original operator’s conversion manual, should anyone wish to convert it to a market stall vehicle to sell, bread, cheese, fruits and vegetables.

Click Here to email the vendor, David, if you are interested in purchasing one of the finest examples I’ve seen recently.

The Story of Lulu:

Lulu was first viewed sitting in an alley in the picturesque town of Josselin, Brittany in 1990.
A daily work-horse for Legros Peinture, Lulu had by then amassed twenty five years of solid service
as a painter and decorator‟s primary means of transport.
With Mr Legros‟ wife being the midwife who attended the birth of my eldest in Auray‟s General Hospital,
I felt sufficient familiarity with the family to ask Mr. Legros if I could have a quick spin as a passenger in his Citroën H.
“Bien sûr!” was the riposte; and, after fifteen minutes touring Josselin‟s country lanes, I felt emboldened to request
that he think of me if he ever decided to trade Lulu for something more modern (and soul-less).
That first trip in Lulu slowly turned into a deeper acquaintance as Mr. Legros regularly invited my kids, my wife, Debbie,
and my parents to accompany either him or his side-kick Serge on short trips around Josselin.
After fourteen years of popping in to check on Lulu‟s state of health, we were told by a former neighbour in Josselin that
Mr. Legros had sold his business to the younger Serge opting for a more leisurely pace of life in his well-earned retirement. Believing the dream of owning Lulu now over, we were surprised at the end of our annual summer holiday to hear from Serge that he‟d promised Mr. Legros that he‟d offer Lulu to me if he ever decided to sell her on.
With the dear wifey, Debbie, occasionally humming Tammy Wynette‟s song D.I.V.O.R.C.E. when she wasn‟t offering a list of „cons‟ to my argument based on the dubious „pros‟ of purchasing Lulu, an agreement was eventually reached whereby Lulu would become the Mitchell family‟s most noteworthy folly on the basis that all families need one.
Debbie offered up the alternative suggestion that the H be converted as a mobile burger bar in the event of a personal bankruptcy brought on by her likely restoration costs.
With 24 hours to complete the adoption papers, we scuttled around for a thousand Euros and contemplated the challenge of driving two cars and three (potentially very restless) children back to Durham at a sedate speed of seventy kilometres per hour. Fortunately, the journey to Durham from Brittany passed off uneventfully and Lulu, after a fortnight‟s playful use in Durham, embarked on a major fitness campaign and facelift.

Back from the health farm after nine months of work, Lulu is now a fetching shade of ultra-radiant yellow. A year prior to the Citroën‟s purchase, I‟d toyed with a mid-life crisis-like acquisition of a Honda VFR 800, but the missus being of a sensible, benevolent tyrannical disposition put the boot into my thoughts of becoming a weekend biker. Two years after vetoing my potential bike purchase Debbie rubber stamped a tentative association with my other dream, allowing Lulu to be given a thick coat of her preferred VFR colour.

All four kids think “dad‟s French tart” is „fab, and she should be considering the cost of her rehabilitation. Elsewhere, it often seems that the whole neighbourhood is clamouring for a lift in our cheeky folly.

As for the ordeal of restoring our H, the parts needed to date were easily sourced from within the Citroën Car Club fraternity; the restoration work carried out by locals Roger, Alan and Jim in Staindrop, County Durham was well executed (but costly); and, I haven‟t quite got to the point where we‟re contemplating a re-livery of Lulu with the intention of flogging burgers and chips at county fairgrounds and the races. Mind you, I owe Mr. Legros a courtesy ride in Lulu and a good lunch for keeping his side of the bargain. 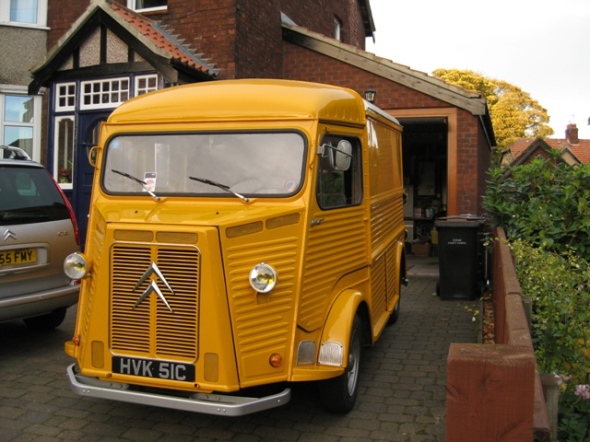 Back from the health farm and much missed, Lulu is now a fetching shade of ultra-radiant yellow. I couldn’t have the Honda VFR 800, but the dear wifey let me have (her) preferred colour. One folly now fully adopted into the domestic portfolio, I was hoping for another toy to stuff in my chest, but Debbie said she was due an indulgence and so she’s getting a dog (Border terrier, I believe!), while I will have to make do with my pig! Personally, in her new attire she’s more of a tart, but so what. All four kids think she’s fab and all want to be picked up from school by Lulu (with their mates in tow) at least once a week.