It’s been a while since our last blog post. 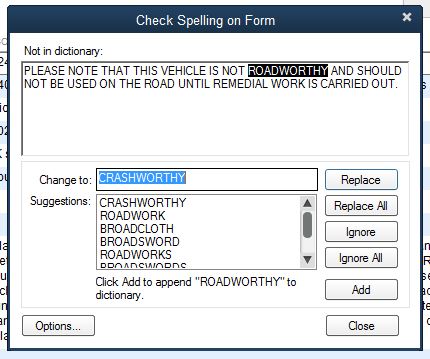 Recently a pre-1960 vehicle came in, which was not required to have an MOT.  It wouldn’t have passed one, and we gave the owner a list of things that needed rectifying with the following notification:

“Please note that this vehicle is not roadworthy and should not be used on the road until remedial work is carried out.”

The wonders of modern spellchecking on our invoicing system took exception to the word “roadworthy” and thought it had a better alternative – see the picture above.

Needless to say it’s been added to the dictionary now.

We’re holding another Technical weekend for D owners in the Citroen Car Club.

They were started over ten years ago, to help owners learn simple fixes to help keep their cars on the road.

Usual jobs completed across a weekend include:

This coming Tech weekend (on April 12 & 13 2014) is fully subscribed, but there is contact information on the Citroen Car Club site, if you are interested in attending further Technical weekends 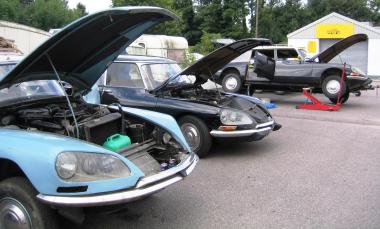 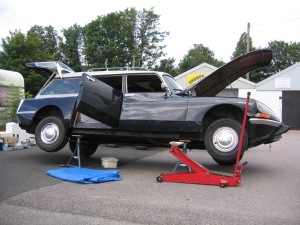 We’ve noticed an increasing number of customers complain that their card transaction is being declined, apparently for no reason, when using our website to buy parts. This is mainly over the past 2 weeks and I’ve looked into each case. Most of the time it is due to the address details entered not matching those on the card authorisation database. I guess the card processing people, in our case Cardsave, have tightened up their security checks. I have spoken with them and the only way to avoid being caught by it is to enter your payment address details exactly as shown on your card statement.

One side effect of this, as we discovered with one such case this week, is that if a transaction is declined due to incorrect address details, the money is still set aside in case the transaction is later authorised. The money apparently does not actually leave your account, but is just not available for you to use. The problem is that if you only just have enough money in the account to cover the transaction and you try again with the correct address details, it gets declined again,  this time due to lack of available funds caused by the first declined transaction.

I’d not heard of this happening before, and to me it seems like complete madness – surely nothing should happen to your funds if a transaction is declined,  but after speaking to Cardsave about it, they tell me that this is standard procedure and the money is available to use back  in your account in 4 – 5 days.  I’m guessing all the card processing companies will operate in a similar way.

I do not like this, but security is security and there doesn’t seem to be much we can do about it. The key is to avoid it happening by very carefully entering your details exactly as they are on your card statement. If your transaction is declined, it is unlikely to be a fault with our website, although we will always investigate if you think it is, it is more likely a slight mismatch of your details compared to the card company database.

What are your thoughts, experiences and comments?

Some people should not be allowed to touch cars!

It’s been a funny month with a higher than usual number of vehicles through our doors with stupid things wrong.

The 3 photos below are the ones that most made us want to say”FFS! Some people should not be allowed to touch cars!”

This is what happens when you do not check there is oil in your H Van engine. In this case, one big end seized and made a hasty exit! 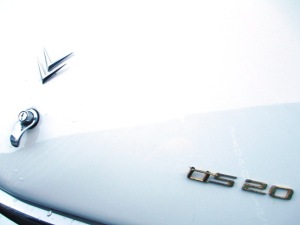 We do not know who is responsible for this, but we nearly didn’t let it in the yard when it arrived! I can understand someone who has nothing to do with cars not knowing which way up the chevrons should be, but then they wouldn’t be fitting them either. This must have been done by someone who should know better, but how the heck they went on to try and fit the D on DS20 upside down too, I’ll never know! 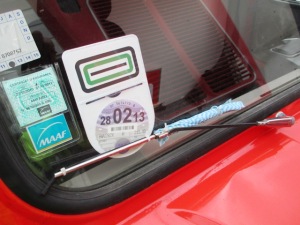 Just put new wiper blades on! It’s not hard – it took me all of 40 seconds!

An amusing enquiry this week was for “cock heater parts” for a DS19.

Now this is a feature that mine certainly doesn’t have and there is no reference to it in the parts book!

It may have lost something in translation however as it turns out they wanted parts for the heater valve – which we just happen to have, but it did make us laugh!

We had a bit of an unusual call out this week.

A long time customer of ours in Irvine, Scotland was having problems with his DS23. The engine wouldn’t run properly and the semi auto gear shift kept stalling the car, which then would not restart easily. The gentleman, we’ll call him Hugh because that’s his name,  had tried unsuccessfully to find someone (anyone!) reasonably local who knew enough about DS carburettors and the semi-auto set up to help him out. He even had someone who supposedly knew all about them travel over from Edinburgh, only to find that when they arrived, they appeared to have forgotten what they thought they knew! We’d been helping out with diagnosing and advising over the phone and by email, but he was going around in circles and getting nowhere (apart from maybe closer to the looney bin!), so I offered to fly up for the day and sort the car out for him.

This resulted in me being at Heathrow airport at 6am on Tuesday morning, boarding a flight to Glasgow with my tools in a bag. Arriving at Glasgow an hour and 20 minutes later I picked up a hire car and drove the 40 mins  to Hugh’s place in Irvine.  After a quick discussion about the symptoms over a cup of coffee (the first of many that day), I set about checking over the carburettor.

Certainly the float height was about 3mm too high – it always amazes me as to how they get that far out. It doesn’t seem to be wear and judging by the crud on the outside of the carburettor, nobody had seen the inside of it for years. The rest of the carby checked out OK. One of the problems was constant fouling of the spark plugs and I’m not surprised, as that float height would have been causing the fuel to be going into the engine in bucket loads! After reassembling the carburettor, fitting new spark plugs and resetting the ignition timing, the engine ran surprisingly well and once up to temperature the slow idle responded well to adjustment.

A drive around the block showed that the semi-auto clutch and gear change controls needed setting up from scratch, which I duly did and when Hugh took it for a drive, he said it had never run or driven that well in his ownership. The test drive also showed an indicator not working and a headlamp out, both of which I fixed whilst I was at it.

The car also needs the roof off and cant rail repaired as well as a pair of engine mounts, but those jobs will have to wait for another day…..

It must be said that the majority of this was happening on Hugh’s driveway in between (and sometimes during) horizontal rain showers and a bitingly cold wind. I think they call that “summer” in Scotland……

Whilst there, another Citroen DS owner by the name of James called in for a visit. He was from just down the road in Kilmarnock,  had recently bought his DS and is in the process of restoring it. He wanted to meet me and have me cast an experienced eye over his car, which he did and I did. I pointed out a few things that needed attention, but otherwise it was quite a tidy job, slightly customised to his taste and should serve him well.  One anomaly was that it appeared to be a 1970 D Super, but with the identity and engine from a 1968 DS19. The RHD 4 speed manual car came from Australia via The Netherlands, so  what happened when and why to cause it to end up in that spec will never be known.

As darkness fell, there was just time for one more cup of coffee and another chokkie bikkie before I drove back to Glasgow, returned the hire car and boarded the flight back to Heathrow. I finally made it home at 10.30pm after  a strange but enjoyable day.

Now, I really must see if that customer in the Maldives needs a hand with his DS…..

Hugh with his Slough built ID19 and French built DS23